Over the past year, Coda’s Testnet has grown from a small group of 65 community members to a cohort of over 850 hailing from all over the world. In fact, since launch the Coda testnet has experienced 1200% growth in cumulative members. Thanks to our active community, the Coda testnet is now one of the largest layer 1 testnets by peer count for non-ICO-ed protocols!

Over the past year, Coda’s Testnet has grown from a small group of 65 community members to a cohort of over 850 hailing from all over the world. In fact, since launch the Coda testnet has experienced 1200% growth in cumulative members. Thanks to our active community, the Coda testnet is now one of the largest layer 1 testnets by peer count for non-ICO-ed protocols! The recently launched Genesis Token Program, to set up a strong community of block producers for Coda’s mainnet launch, has also seen robust activity. There are 850 Genesis token grants still available, for those who would like to get involved! 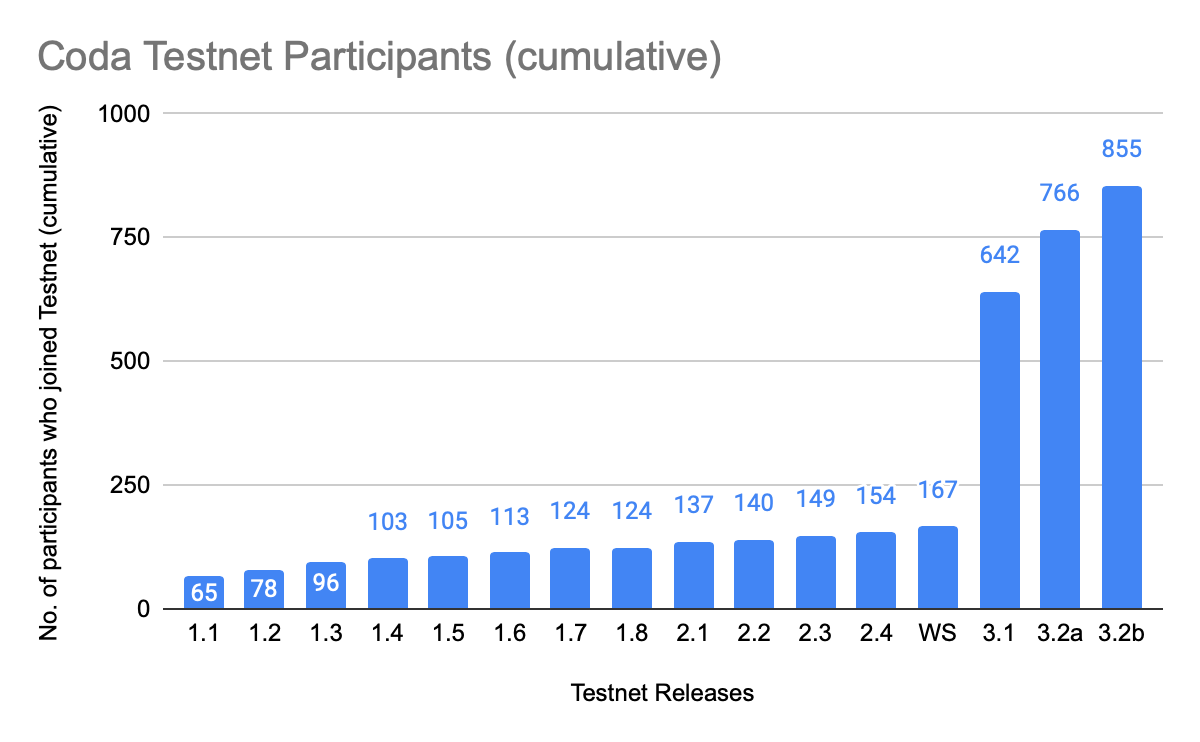 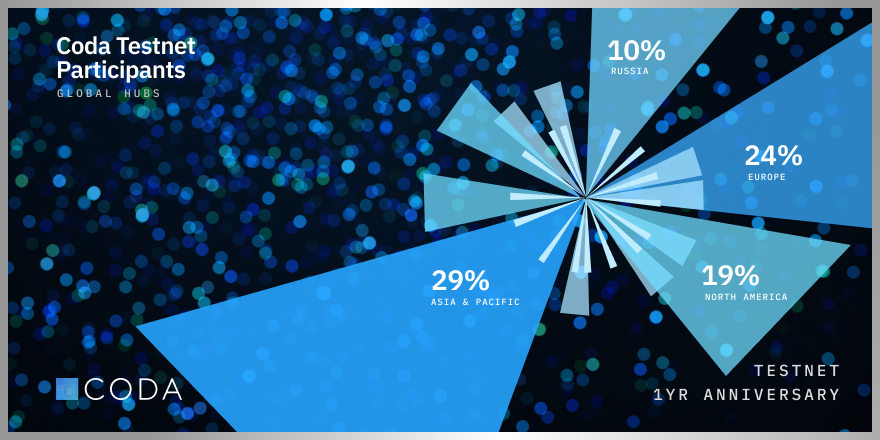 As a protocol that values decentralization and access, Coda currently has participants from all over the world making up our highly distributed and global community. The Coda community hails from over 180 different countries, with representation from countries like Russia, the UK, the US, China, Ukraine, Turkey, Egypt, Canada, the Netherlands, Korea, India, and Germany – just to name a few.

For fun, we asked the community to send us music they like to listen to while participating in testnet, so we could create a global playlist of songs enjoyed by Coda members. The two playlists feature songs from a variety of countries; give them a listen!

To celebrate the 1-year testnet anniversary, we also asked the community, including Testnet participants and the O(1) Labs team, to share their favorite Coda testnet memories: 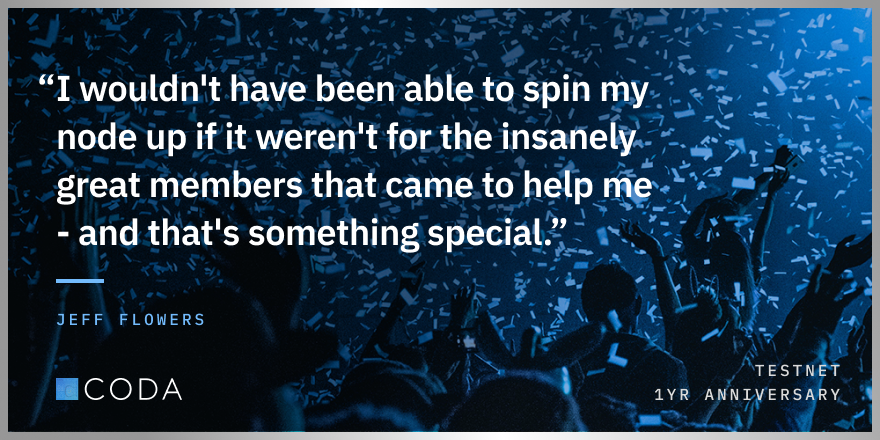 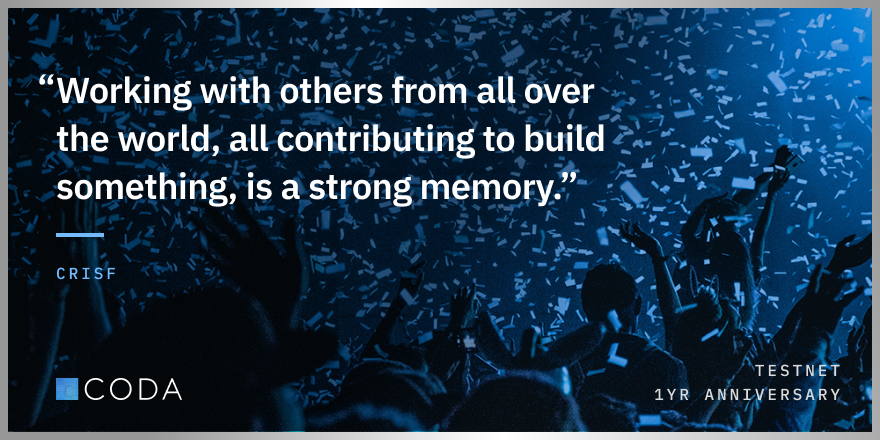 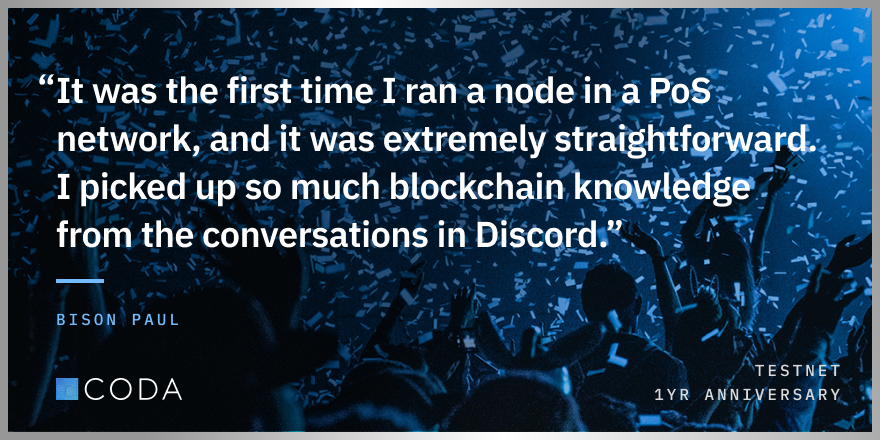 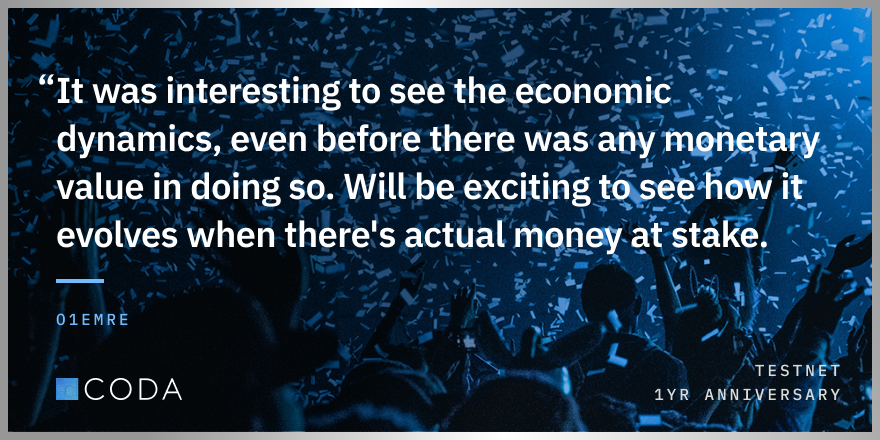 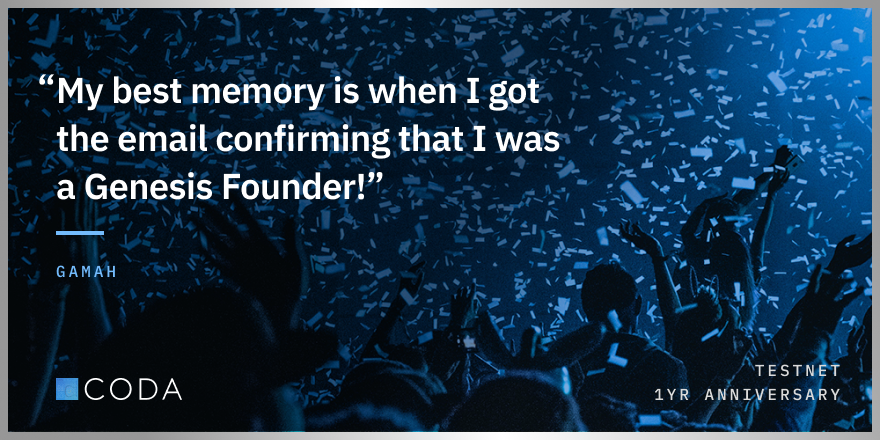 We even had a community member share his awesome journey – how he first discovered Coda, to learning the technology from scratch, to ranking highly on a testnet release, to ultimately being selected as a Genesis Founding Member:

“I came as a newbie and did not have any basic knowledge before about running Testnet, operating nodes, and producing blocks. I remember I was guarding my wife in the hospital alone, and that was when I discovered the Coda Protocol. Maybe the best things come when you’re at your worst times lol.

Then I studied all by myself. I registered and I remember that I was in the bottom 2 lines in the list of participants for Testnet 3.2b. I am thankful to have been given such a rare opportunity, so I vowed not to waste it. Then I joined Discord and tried to find someone who could help me. I remember I spent up to about 19 hours each day studying the Coda Protocol Testnet, for 3-5 days, until I got less sleep and headaches hahaha. Finally I managed to run Testnet 3.2b so well that I even became one of the members who got high points on the Testnet 3.2b Leaderboard. Yeppy!!!

The peak for me was being chosen to be a part of Coda’s Genesis Founding Member Cohort 2. I am very, very happy because of my hard work. I am very grateful and thankful to all the Coda Protocol team, especially to the O(1) Labs Team, @garethdavies and @Kunkomu. Because they have helped me to that point.

Lastly, Coda Protocol: Thank you for giving this opportunity. I will continue to help Coda Protocol to achieve success in the future in making tiny cryptographic proofs, enabling cryptocurrency as accessible as any other app or website, so that Coda Protocol technology will be used by all worldwide. Love Coda Protocol!!!”

Aaron Henshaw, Co-founder and CTO of Coda partner Bison Trails, said, “We’re thrilled to see Coda reach this milestone and to recognize the success of their testnet. Over the past year, Coda grew an active and technically-minded community and demonstrated scalability to support an impressive number of concurrent nodes without performance degradation. We’re looking forward to Genesis and mainnet launch!”

Andrew Cronk, Cofounder & Head of Product at Figment Networks, said, “Coda Protocol has succeeded in building a strong and diverse community around the open-source technology, a critical achievement in blockchain. We have invested resources to support Coda integrations on our Hubble and DataHub products in anticipation of their forthcoming mainnet launch and are looking forward to further supporting Coda validators, stakeholders, and developers as the community continues to grow.”

Over the last year,the O(1) Labs engineering team has developed new products to improve the access, usability, and ease of building with Coda Protocol. This includes:

And innumerable improvements to logging, performance, tooling, and usability “under the hood”. We’re an open-source project, so feel free to check out our progress on Github!

We have a long wish list of products in our future roadmap. As a sneak peek, here are a few things we are targeting for the upcoming Testnet Release 3.3:

Through the past year, participants have been able to rack up millions of testnet points on the Leaderboard and counting. Community participation is at an all-time high and has also resulted in numerous robust community-driven initiatives. For example, translations of our documentation by community members have allowed Coda to rapidly expand into new geographies, such as those mentioned earlier. Below is a list of other existing community resources and events that happened and are thriving thanks to our supportive and active community members in the last year:

The team would like to wholeheartedly thank everyone for their participation and efforts over the last year in helping Coda grow. In the next few months, we plan to share with the community more of our roadmap and plans towards mainnet launch and beyond. Stay tuned!